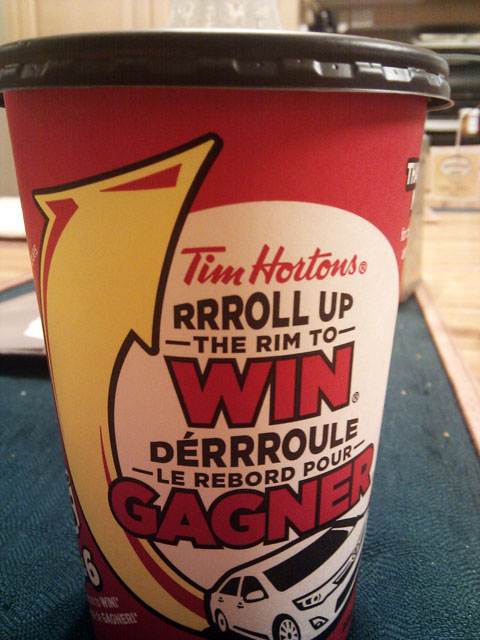 RRR. RRRRR. RRRRRRRRR! RRROLL UP THE RIM TO WINNNNN! Yes, it’s that time of year again! Are you ready to Roll Up The Rim To Win? Tim Hortons is in season :)

It’s the game that holds a special place in every Canadian’s heart, a sure sign that Spring is on the way, and one of my favourite indulgences. I won’t lie, Tim Hortons sure knows how to pack a lot of entertainment into their coffee cup, with anticipation at every purchase – the great suspense as each rim is rolled, the joys of seeing a prize revealed, and of course wry amusement as the infamous Please Play Again mocks and teases. If you’ve ever rolled up the rim, you know what I’m talking about.

Last year was pretty good actually, I did quite well in the gratuitous coffees and donuts department. No car, but that was merely a setback. I return again this year with renewed high hopes and my sights on the Toyota Camry. Yeah, come to Poppa.

And how has the season been as yet? So far it’s Jon: 0 Timmies: 2, but I’ll permit this minor headstart ;) They don’t know yet that I’m the coffee king. Lets do this! I will be keeping a running tally of beverages purchased and prizes won. And who knows – will it be 5 coffees? 50 coffees? It’s just a matter of time before I’m holding the winning cup in my hands! 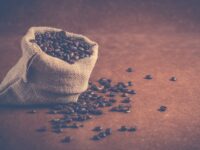