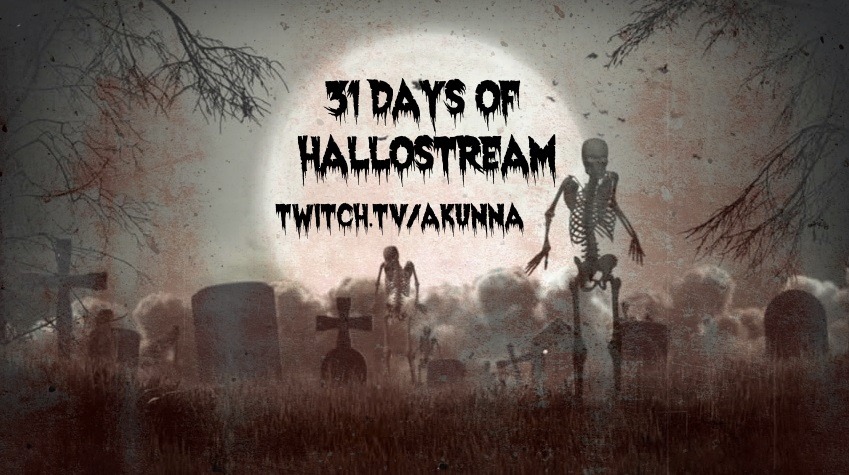 Viewers beware, you’re in for a scare!

Brrr, as Summer comes to an end and Fall returns with those cooler days and nippy nights, here’s something entertaining to watch while you spend more time indoors.

A close friend of mine is doing something pretty neat on Twitch, trying out a different game from the darker genres daily.

This tremendous event will be a great way to experience many games from the horror genre vicariously through her, and I can’t think of someone better to be your guide – she loves this stuff.

Head on over to Akunna’s Twitch channel and check it out.

Alice: Madness Returns follows Alice Liddell, a girl suffering from trauma caused by the death of her family in a fire. Alice was discharged from a psychiatric clinic and now lives in an orphanage for mentally traumatized orphans under the care of Dr. Angus Bumby. To get rid of the trauma and learn the truth about her past, she once again falls into Wonderland, where a new evil force has corrupted it.

Day 6 The Evil Within

While investigating the scene of a gruesome mass murder, Detective Sebastian Castellanos and his partners encounter a mysterious and powerful force. After seeing the slaughter of fellow officers, Sebastian is ambushed and knocked unconscious. When he awakens, he finds himself in a deranged world where hideous creatures wander among the dead.
Facing unimaginable terror, and fighting for survival, Sebastian embarks on a frightening journey to unravel what’s behind this evil force.

Wick is a suspense thriller where you play as a small candle in the ruins of a dark, oppressive cathedral. Though the halls are littered with victims of a mysterious plague, you are not the only soul left. Use the properties of a candle, a few tricks, and a trusty douter to prevent yourself from being discovered.

Between reality and a nightmare. Sanity and madness. In Dark Fracture the player explores a world that’s ever-changing. Face your character’s inner turmoil and chaos. Walk the edge of madness in their shoes in this thrilling first-person psychological horror experience.

There is reportedly an evil inside that house. Something about an old funeral parlor offering a last chance to talk to their dead loved ones. Plus something about lights, laughter, a girl, missing people, etc… You know the same stuff everyone claims. Take a team, and check the place out.

Left 4 Dead is a co-op action horror game that casts up to four players in an epic struggle for survival against swarming zombie hordes and terrifying mutant monsters.

Call of Duty: Black Ops – Zombies is a co-op game where your party is pitted against increasingly challenging waves of zombies. Can you survive?

Immerse yourself in Little Nightmares, a dark whimsical tale that will confront you with your childhood fears! Help Six escape The Maw – a vast, mysterious vessel inhabited by corrupted souls looking for their next meal.

Amnesia: The Dark Descent puts you in the shoes of Daniel as he wakes up in a desolate castle, barely remembering anything about his past. Exploring the eerie pathways, you must also take part of Daniel’s troubled memories. The horror does not only come from the outside, but from the inside as well. A disturbing odyssey into the dark corners of the human mind awaits.
A sound of dragging feet? Or is your mind playing tricks on you?